The Making of Northmount’s Star Wars:
A Student Review 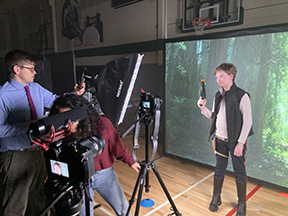 For the second year in a row, and in response to the COVID pandemic, Northmount School filmed a movie instead of doing their traditional stage play. Last year’s production was Star Wars, which Northmount had done on stage several years before. However, doing it as a film meant that it had a whole different set of challenges. Overall, it was a great experience filming it, because for most of us involved it felt like a completely different and new experience.

As in previous years, the production was directed and produced by Mr. Kurek and Mr. Yeow. Mr. Kassouf served as the on-set Production Coordinator, and was there throughout the entire filming. The fantastic camera work was done by Ms. Isabel Padolina, who served as Director of Photography. Mr. Savidge directed the music, Ms. Del Grosso created many of the props and set pieces, and Mrs. Vitro helped with the creation of many of the more complicated costumes. Aside from Ms. Padolina, we had help from a number of parents and people outside the Northmount staff: Mr. Peter McAlpine designed the makeup and helped with the lightsaber choreography and Mr. Ray Wu (‘20) directed and filmed the behind-the-scenes documentary. 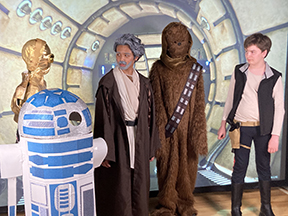 One of the interesting differences between doing a play and doing a film was that we filmed this production out of chronological order, the same way a real movie would be filmed. For example, if a particular actor was only in a couple of scenes throughout the movie, we would try and film all those scenes in one or two days, so that we didn’t have to keep bringing the actor back. Also, the directors created a schedule so that they could film all the scenes that consisted of certain groups of actors who were often together, such as Luke, Leia, Han and Chewbacca, or C-3P0 and R2-D2. For backgrounds, we used screens with scenes from the movies projected on them. But there were other sets that were specially built, such as Yoda’s home on Dagobah, or the cockpit of the Millenium Falcon.

One of the other things we had to put together in filming was all the practical special effects. For example, when the heroes are on Bespin and Darth Vader uses the Force to pull Han’s blaster out of his hand, we used fishing line to make it look like the blaster was flying out of Han’s hand. We filmed this scene in multiple takes, and showed Darth Vader catching the blaster after it had been pulled away from Han. There were also many people involved in the filming of the trash compactor scene. We had to use giant cardboard “walls” on wheels to make it look like the walls were closing in. Also, even though we used filmed backdrops for a lot of the scenes, we tried many other techniques as well. At the beginning of the movie, when Darth Vader and the Stormtroopers attack the Tantive IV, we used the entire gym to film the scene. We used smoke machines to add to the suspense, and the darkness and the smoke really added to the visuals, reflecting the lightsaber colours for instance. 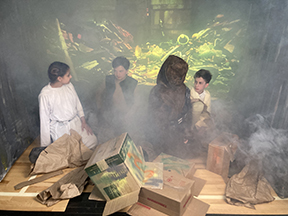 Speaking of lightsabers, there was also a lot of choreography involved in the filming of these fights. We learned that a lightsaber duel can’t just be two people smacking each other with “laser swords” over and over again. All the moves have to be planned out ahead of time and they need to be carefully practised. Sometimes we filmed these fights in front of the screens, but other times we tried to use as much of the gym as possible, which gave the actors the chance to use more complicated moves.

All in all, the filming of Star Wars was an incredible experience. Having these kinds of opportunities is one of the best things about going to an amazing school like Northmount! 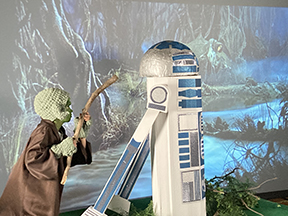